Rob has been painting at last!

Since moving to Tasmania just one year ago Robyn has been suffering painter's bloc! It has been a very busy time coping with the move from Canberra, building our studios and framing workshop as well as establishing Weare Gallery. The dust is settling though and Rob's creativity is re-emerging. One of her new challenges is to adjust to the totally different colour palette in Tasmania compared to the outback and New South Wales where she has painted for several years. The colour green was never an option in those areas but Tasmania at the moment is unbelievably green. Hope to put up some pics soon of Rob's new work.
Posted by Weare Gallery Art & Frames at 12:07 1 comment:

We have just returned from a trip to Arthur River on the west coast of Tassie. What a wonderfully wild place it is! Huge waves constantly crashing onto the beaches and sucking out everything in their path. Huge piles of massive logs and kelp heaped onto the sand and rocks and in most places not a footprint to be seen. This is always a welcome scene for a photographer - most landscape photographers prefer not to share their space with other humans. We stayed in the Sunset Cabins at Arthur River - with a lovely view of the estuary. Highly recommended. We travelled up the Arthur River on the Reflections cruise. We were lucky enough to see the sea eagles feeding their young. One of the highlights was a trip to Couta Rocks just south of Arthur River where the sea is so ferocious that all boats are kept on high slips for protection. Have attached a couple of pictures for your enjoyment. They are available for purchase of course.
Posted by Weare Gallery Art & Frames at 13:52 No comments:

Well, the 2011 Deloraine Craft Fair is over for another year. It was the first year for us in our new gallery and we were overwhelmed with visitors and complements (and sales of course!). It is reassuring to know we are delivering images people enjoy - people from all over Australia. We have many Tasmanian images (photographs and paintings) as well as images created during our visits to the Australian desert and other parts of Australia.

As well as the huge exposure the Craft Fair has brought to our new gallery, it has also created much interested in our picture frames. We love making frames and helping clients find just the right framing solution for their images.  Our framing workshop has the very latest in machinery and equipment including a precision mitre saw and a computerised mat cutter. We have many framing samples (including lots of unusual and elabourate ones) and mat boards on hand (including textures, linen and silk) to help in creating wonderful designs, both modern and traditional. Attached below are photographs of frames recently created for two Norman Lindsay facsimile etchings. These are for sale - if you are interested please call us or visit.  A great investment and stunning decorator items 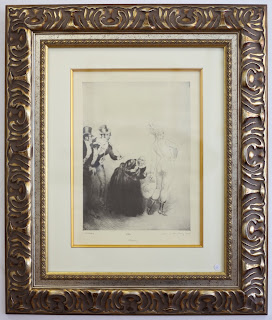 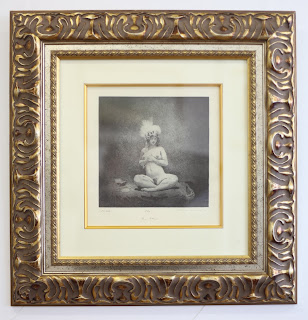 Posted by Weare Gallery Art & Frames at 01:54 No comments:

Nick's photography - The Power of Time 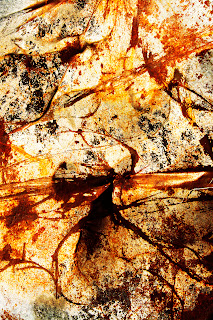 Here is a fascinating photograph by Nick. It was taken last year in a dry riverbed at Ross River, Northern Territory.

Any idea what it is? Is it a cliff or a close-up of a gritty rock perhaps? The answer is no - you may be surprised to learn it is a wizened old car bonnet! This car must have been there for many years, probably flooded many times, etching in the beautiful rust colours and camouflaging it totally in the desert landscape. This abstract image is fantastic on a large scale and would look wonderful in an executive office or modern home.

Hope you enjoy this wonderful image.
Posted by Weare Gallery Art & Frames at 22:38 No comments:

We are into day two of the annual Deloraine Craft Fair. It is a huge event in its 31st year and spans 4 days early each November.  There are 16 venues and over 800 stallholders. Much of the art and craft is of international quality. We apparently have over 30,000 visitors to the fair.  Yesterday was incredibly busy with hundreds of people through the door (and some sales!) and today is likely to be even busier with beautiful sunny, warm weather.  We have had many visitors from the north west coast, the southern region, Launceston and the rest of Australia. It is wonderful exposure for us especially to the Tasmanian population.  I took an early bus ride and visited Tony Smibert's studio (internationally renowned watercolourist).  I was lucky enough to be there for one of his painting demonstrations. His work is a blend of eastern philosophy and method and the methods of Turner. You can learn more about Tony and his work by following this link - http://www.smibert.com/

Will check in again soon and show you some of our artwork.  Have a great day.
Posted by Weare Gallery Art & Frames at 15:04 No comments:

Weare Gallery
Building History
Weare Gallery is in a heritage building which has been a landmark in Deloraine since it was built in 1863. Situated on land granted to Alexander Robertson in 1854 and purchased in 1862 by James Scott, surveyor, after whom Scottsdale is named.
James Scott was the brother of the prominent early Tasmanian surveyor Thomas Scott, the man who gave the town of Deloraine its name, taking it from the Lay of the Last Minstrel, by his kinsman, Sir Walter Scott. The building has since had many uses.
In 1883 the front drawing room was converted to a shop, which now houses the Weare Gallery.  It has been a haberdashery,  butcher shop, antique shop and a Fly Fishing School, as well as a private residence for many families.
Most notably, in recent years the property was known as Berry's Antiques to legions of travellers passing through Deloraine on the original Bass Highway. Locals have fond memories of Mrs. Berry.
The large verandah over the footpath was added in the 1920s', the original being a single skillion roof.
The Building was added to the Tasmanian Heritage Register in 1997 and has been restored in accordance with heritage guidelines.
118 Emu Bay Road
Deloraine
Posted by Weare Gallery Art & Frames at 03:46 No comments: